Daniel Clews on the success of tribute acts, music in education and performing with Tim Minchin 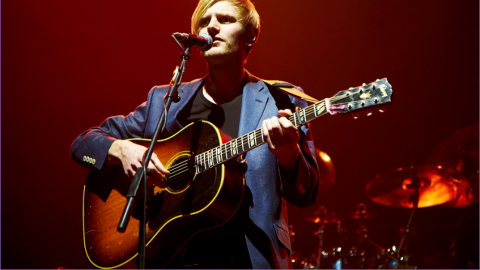 “We just love telling these stories and I believe this passion is what keeps Night Owl Shows moving on. “

An entertainer in his own right, Daniel Clews is also the creator of Night Owl Shows, a collective of artists who, like Dan, do other work, but have a passion for bringing the lives and music of some of the most influential singer/songwriters of the 20th Century to adoring audiences. Their acts cover Aretha Franklin, Carole King, Dolly Parton, Elvis Presley, James Taylor, Johnny Cash, Joni Mitchell, Tina Turner, Amy Winehouse, The Nashville Story and Voices of Bond. They receive stunning reviews and consistently play to full houses at the Edinburgh Festival Fringe and wherever else they perform. Here’s some background to the man behind their success, born in Sevenoaks, Kent, at the time of the Spring Equinox,1980.

Dan, let’s start with a chronology to see how you reached your current position. Were you born into a musical family and was your talent recognised at school?

I certainly grew up in a musical environment, mostly from my Dad’s side. He’s a mean guitar picker, if you catch him on the right day. I went to Tunbridge Wells Grammar for boys. Music wasn’t high on the agenda, but we created our own little scene around Sevenoaks and T’Wells. Oh happy memories indeed!

Was being a singer/songwriter an early and clear ambition?

I knew I wanted to play and write; singing came later when I’d had my lot with organising singers and trying to manage another ego (apart from my own of course); oh how the tables turn.

How did you begin what turned out to be your career?

I couldn’t say that one thing is my career, but I’d say what led to all of this was picking up a guitar age 10. As soon as that happened I knew what I wanted to do.

Tell me something about life on the circuit.

If you want to be successful in music you have to carve your own circuit, I’m still carving mine.

You also carved a path to Sweden. How did that come about? How long were you there and did it change things for you, give you new ideas or open up further opportunities?

I met a great musician in London who sold the Swedish music scene to me. It wasn’t hard. Sweden is a big player on the world music stage. It’s the third largest exporter of music in the world. The musicians out there are simply phenomenal; incredibly well trained and cultured. I played in a band called Dan Clews and The Stars Above. We played psychedelic folk. The guys taught me so, so much. I owe them a lot.

You went on to secure a publishing contract with Sir George Martin and later to work with Tim Minchin. How important were those two events?

Securing a publishing deal with Sir George Martin was huge for me and has led me to so many wonderful opportunities, including writing in the heart of Music Row, Nashville, as part of one of the best stables of writers on the Row (Downtown Music Publishing, George Martin’s sub publisher). I’m immensely proud of the association. With Tim, he’s been kind enough to include me in some iconic performances. He took a liking to my music and did his best to get me exposure in the UK. A top, top guy and an immense mind.

You had a string of successes at this time but also embarked on a new venture setting up ‘We Teach Music’. How did that come about and what does it aim to do?

I have repeatedly seen that schools are unable to provide music education alongside the many other demands made of over stretched teachers. While there are a few with the finance to fund such lessons, this puts us in the school and in a position to help those that aren't. Music lessons are proven to improve students' behaviour and cognitive ability so it breaks my heart to see that this isn't widely available.

Your life is well-documented on line, but what seems to be missing is the link from where we are at the moment to the creation of what seems to be a consortium of acts, beloved and well-known to thousands of people at the Festival Fringe and elsewhere, under the umbrella title of Night Owl Shows. Can you fill in the gap and explain how the creation of this phenomenon came about?

Night Owl combines all of my passions and I think this is why it’s really taken off. We try to make the shows informative and that satisfies the passion for teaching. We try to execute these amazing songs with absolute precision and integrity which covers the passion for playing. We play these songs as artists giving great exposure to that side of our careers too.

Which acts did you start with?

It all started with The James Taylor Story, due to my own solo shows being repeatedly compared to the great man; an ultimate compliment and what inspired me to investigate the tribute genre. Then I saw Bookends (who are also in Symposium Hall playing the music of Simon & Garfunkel) and they made me realise that you could do this with integrity. They also helped me get set up, so I have much to thank them for.

After doing James Taylor, I started working with Phoebe Katis who I knew would do an amazing Carole King, which she really does. Then came Charlotte Brereton with whom I have always shared a mutual passion for Joni Mitchell. Last year we introduced Hannah Richards, paying tribute to Dolly’s music along with Jamie Rodden who is portraying Johnny Cash; these guys completely exceeded my expectations so I have also included them in a new show about Nashville this year, which we premiered in Kent last month. Oh my god, those guys together are dynamite! This year Charlotte Brereton will also be tributing Karen Carpenter, which was a huge education and a huge back catalogue to take on, but I know she will totally nail it. We also have Reine Beau Dudley taking on Amy Winehouse. Reine was an intern last year, but one night during the run she floored us with her singing; she is a phenomenon, not to be missed!! Then, Phoebe is once again doing 007 Voices of Bond, when not singing Carole King. Phoebe is a power house and 100% owns these huge songs and that takes me to the celebrity in our ranks, Cleopatra. I can honestly say I have never seen anyone work a room like Cleopatra; she is breathtaking and I truly believe worthy of superstar status. Grab your tickets fast for that one because she is going to blow the roof off The Symposium Hall.

And it just seems to have grown and grown…..

We just love telling these stories and I believe this passion is what keeps Night Owl Shows moving on. We’ve recently gone worldwide with shows in Australia at the Adelaide Fringe and shows in the US too.

I’m sure you have some remarkable statistics on these shows, but how do you account for the enormous success of tribute acts?

The genre is fascinating and it can be approached in so many creative ways, not just visually (which we try to avoid) but with integrity, creativity and honesty. In our case what I believe audiences enjoy is our passion for the music and the comprehensive storytelling each show offers.

What plans do you have for the future in terms of your own performance and writing career, obtaining further acts to develop Night Owl Shows or other projects and the development of ‘We Teach Music’? Is there a musical in the pipeline or the founding of a performance academy somewhere?

Night Owl is certainly the big focus at the moment and we hope to expand into the U.S market. We will be touring numerous shows, expanding at the Adelaide Fringe and I will continue to develop all the shows we have. I certainly think we have the makings of a musical and this is in my conscience, but all in good time. Right now my head space is filled with Edinburgh Festival Fringe 2019. I’m so excited by our roster this year. We have raised the bar and I really cannot wait to get these spectacular shows in front of Fringe audiences and blow the roofs off these amazing venues.

Many thanks Dan and we wish you and your team of star performers all the best for a hugely successful season at theSpace, Symposium Hall at the Edinburgh Festival Fringe.